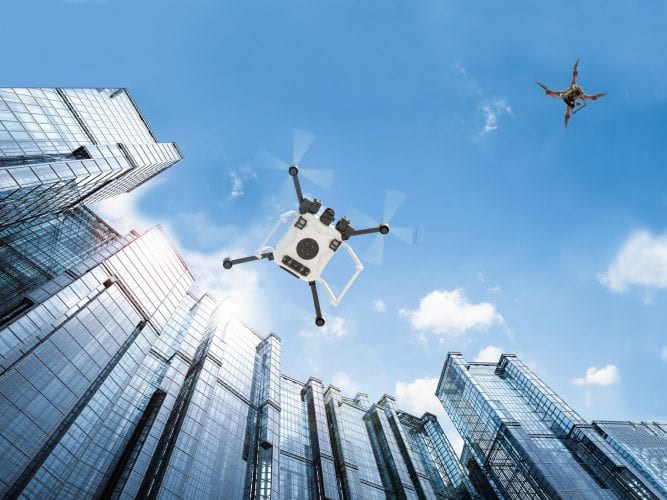 While waiting for implementation of remote ID, many UTM providers are working with airspace awareness partners to include and distinguish non-cooperative drone traffic in their common operating picture.

The drone industry and regulators agree that remote identification, once implemented, will be a key enabler of greater airspace integration — but not the full solution. In addition to terrain, localized weather information and other datasets, providers of unmanned traffic management (UTM) services are working to seamlessly include non-cooperative drone traffic in their airspace awareness picture.

To accomplish that, UTM providers are increasingly working with a variety of partners to leverage radars, radio-frequency (RF) sensors and other technologies that add pieces to the puzzle.

Monitoring non-cooperative drone traffic is much more difficult than tracking cooperative drones, and a challenge that military, airport and other critical infrastructure customers have yet to determine best practices for.

Hundreds of drone security solutions are on the market or in development, relying primarily on RF and/or radar as well as acoustic and electro-optical/infrared (EO/IR) sensors to discover drones. Most are far more effective in a deserted environment than crowded, signal-dense cities; similar to safe drone operations.

This is the most difficult challenge.

“Let’s say you’re in a crowded party and somebody shouts toward to you and does everything in their power to make you hear him — he faces you, you can hear him and read his lips. This is a cooperative drone situation,” Nir Raz, CEO and co-founder of Israeli drone monitoring startup Vorpal, told Avionics International. “To detect non-cooperative drone traffic, you need to pick up on every whisper in the corner of the room, quietly to the person next to him with his back to you. And you need to do this with no false alarms.”

To make matters worse, reading the contents of signals transmitted between drones and their operators — not to mention nearby RF-enabled devices, such as cell phones and other Bluetooth/Wi-Fi devices, which would also be picked up — is illegal in most localities. Decoding a signal to extract GPS coordinates violates federal wiretapping laws in the United States, and just about all drones nowadays encrypt signal transmissions.

Vorpal accomplishes this by using passive RF sensors and multilateration — where multiple sensors pick up on differences in signals’ time of arrival to pinpoint the location of its origin — to pick up and localize drone activity based solely on the physical waveform of signals transmitted. Highly-advanced algorithms then compare detected signals to a library of known drone transmissions, picking out drone activity (and often without reporting thousands of other RF signals in the targeted space.

Raz, who holds a PhD in physics from Tel Aviv University, told Avionics his company’s VigilAir solution is able to provide locational accuracy of drones — and often their operators — at close to GPS accuracy with nearly zero false positives. That’s a claim made by many drone security companies, but Vorpal’s system is currently deployed in major cities on both sides of the Atlantic and has been used by police to track down dozens of unlawful drone operators during major events.

“The benefits of this approach is that they don’t need to transmit, reducing complexity, cost and regulation hurdles,” one expert in drone sensing technologies told Avionics.  “But there are downsides, including emplacement challenges. With something like radar, you are trying to cover you blind spots with additional sensors. With this technology, you need many sensors to see each spot to have ‘coverage.’”

There are two additional vulnerabilities to Vorpal’s approach. Drones that operate fully autonomously, without any communication, won’t be detected; and the system may not identify the RF signals of a drone not yet in its database. Raz estimates the company’s library has more than 90 percent of commercially-operated drones in its database and is continually adding new information.

Hidden Level, a data-as-a-service company which recently joined Uber Elevate’s ecosystem as an airspace awareness partner, told Avionics its solution also complies with privacy laws and does not record or read personal information. Many other passive RF-based drone security companies contacted by Avionics International did not respond to specific inquiries about their technology’s viability in RF-dense environments and privacy compatibility.

A representative for Hidden Level said the company is currently working with customers in metropolitan areas on both the east and west coasts of the United States, with public announcements slated for later this year.

Utah-based Fortem Technologies told Avionics that radar is the superior technology for detecting non-cooperative drones aircraft in dense civilian populations, as is it relatively cheap and easy to turn a drone “RF-dark” and render RF sensors powerless.

Drone security ultimately requires a multi-layered approach, combining RF and radar along with cameras, acoustics and other secondary sensors to detect and track all possible types of non-cooperative aircraft. Mitigation that avoids collateral damage is an even more complex challenge, with currently just four federal agencies authorized to carry out counter-drone activities — jamming or otherwise — as drones are considered aircraft by federal law.

In turn, for the airspace awareness picture provided by a UTM company to enable drone delivery or air taxis in a crowded environment, it will need to incorporate real-time data on both cooperative and non-cooperative drone traffic — and quickly and accurately distinguish between the two.

AirMap, a leading provider of UTM services and member of the Federal Aviation Administration’s remote ID cohort, is working with Vorpal to solve the challenges involved in building a common operating picture.

“We are working together to develop a common operating picture of low-altitude airspace that will enable authorities to monitor cooperative and non-cooperative drones and accelerate BVLOS flights,” a representative for AirMap told Avionics.

For enabling drone operations beyond visual line of sight, however, many see manned aviation as a greater safety concern than non-cooperative drones.

“For the most part, concerning the safety case for our advanced BVLOS applications, the hurdle is more about detecting other manned aircraft,” said Ted Lester, chief technologist at GE’s AiRXOS. “You don’t really need to have a huge knowledge of non-cooperative drones when you’re doing complex drone operations.”

By the time UTM is online at scale, Lester is confident that communication networks will be reliable enough that strategic deconfliction and tactical vehicle-to-vehicle deconfliction, using onboard detect-and-avoid and cooperative mechanisms, will be sufficient in almost all circumstances.

“If you really need to go down to the third level, and both of those systems have broken down … an onboard camera may suffice, or you may be able to meet that level of safety without three levels,” Lester added.

In Lester’s view, it may be more important to ensure data is flowing the other direction — from the UTM system to a drone surveillance or counter-UAS system — to ensure cooperative drones are not targeted.

“I do think there’s a role for a UTM system to play in making sure that those counter-UAS systems know the legitimate systems,” Lester said. “We’re going to have package delivery drones, and drones doing [various kinds of inspections], you don’t want these counter-UAS systems being triggered all the time by legitimate systems. So I think UTM plays a huge role in making sure that all the legitimate vehicles are known and trusted.”

For that, the industry ends up back where we started: waiting for the implementation of remote ID to distinguish between cooperative/known and non-cooperative/unknown drones.

“Current solutions are more than capable to integrate non-cooperative traffic from a technical point of view,” a representative for Unifly told Avionics. “Further development of the legislation and the practical means for authorities to intervene are standing in the way for the full-scale roll out of drone traffic.”

“The first step is remote ID defined by international standards as ASTM and ASD-STAN; to know exactly who is flying, and the UTM system; to know if they are supposed to be there.”