Iran’s Ministry of Defense is investing in its unmanned aerial vehicle (UAV) technology to ensure it remains one of the top countries in combat drone development, according to state media.

According to the Jerusalem Post, Iran has produced several lines of drones, such as the Ababil series, the Mohajer, the Karrar and the Fotros. The Karrar, for instance, is a jet-powered target drone manufactured by the Iran Aircraft Industrial Company.

Many of Iran’s drones are designed similarly to their US and Israeli counterparts, the Post reported. It’s Fotros UAV was built by the Iran Aviation Industries Organization (IAIO) and is one of the largest drones operated by Iran. It can fly up to 25,000 feet and stay airborne for 16 to 30 hours. The Post noted that the drone has retractable landing gear.

Iran has also invested in “vertical armor-piercing bombs” to be used by drones, according to the outlet. For instance, the country’s military has equipped its Mohajer-6 UAV with bombs under each wing and used it against Kurdish dissident groups, according to the Post. Iran has also armed its Karrar drone with an MK-82 bomb, an unguided, low-drag, general-purpose munition.

Second Brig. Gen. Afshin Khajeh Fard, head of the IAIO revealed on Saturday that Iran is one of the top five countries in UAV development.

“We will certainly supply anything needed inside to strengthen the country’s deterrence power and we will not wait for the removal or extension of the sanctions,” Khajeh Fard added, insinuating that the country plans to export military products following sanction termination.

According to the outlet, Iran has made “giant advancements” in the aerospace industry, especially in the manufacture of UAVs.

In 2018, Secretary of Iran’s Aviation and Space Industries Association Hamed Saeedi revealed that Iran is among the top 10 countries worldwide when it comes to drone manufacturing, Fars News reported. 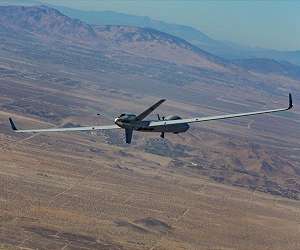 Britain and Belgium signed a statement of intent to work together after both countries acquire the MQ-9B drone, they announced this week. The Remotely Piloted Aircraft System is built by General Atomics Aeronautical Systems of San Diego, and is known as the Protector RG Mk1 in Europe. In remote signing ceremonies on Tuesday, Air Chief Marshal Mike Wigston of the Royal Air Force and Maj. Gen. Frederik Vansina, Commander of the Belgian Air Component, agreed to seek cooperative opportunitie … read more