It will be different, but not for the worst. Not if Andrea Ponti of Ponti Design Studio has a say in it. Focusing on public transport and other means of transport in Asia post-2020, Ponti has now unveiled a new concept ideal for daily commutes. This time, it’s a passenger drone inspired by a private jet, just perfect for commuters looking for safer, greener and more convenient travel options.

Meet Kite, the luxurious passenger drone that will make commutes shorter, more pleasant and infinitely safer as far as the risk of sharing the same space with too many people goes. To design Kite, Ponti has looked at two different sources of inspiration: the black kite migratory bird of prey common in the Hong Kong region, and private jets for the interior layout. Add these to what is basically an oversize unmanned drone, and you get Kite. 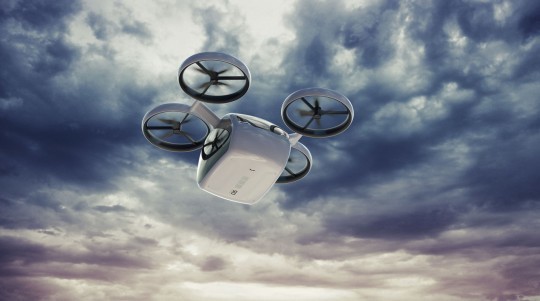 Kite was designed with use in China’s Greater Bay Area in mind. This is a large industrial region in Southern China, consisting of nine cities and the two special-administrative regions of Hong Kong and Macau. Using Kite for daily commutes would considerably cut down transfer times, with the added benefit of being a no-noise and no-emissions alternative to current options. Plus, the “sophisticated and minimalist design” goes just perfectly with the spirit of Hong Kong and the area, the design studio notes in the project’s description.

Kite is an autonomous, all-electric passenger drone that is propelled by four double-helix rotors that allow for takeoff, landing and making turns. The compact fuselage is made of composite materials, with one entry point at the rear and the windows doubling as emergency exits. LED headlights are used for landing and low-altitude flying, maximizing visibility, while retractable landing skids make landing smoother.

Ponti imagines the fuselage as compact and with curved edges, minimizing drag and optimizing maneuverability during flight. The interior, on the other hand, is inspired by a private jet in terms of layout but still marked by the same minimalist style. You get a central aisle and four seats, with four-point quick-release safety harness, and retractable trays to allow for in-flight office time or quick snacks. 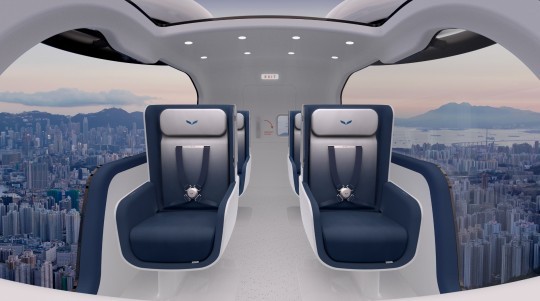 The seats are made of polycarbonate shell, with soft fabric cover and leather cushions for maximum comfort, and are fully reclinable. While the claim that the interior layout is inspired by a private jet probably put images of plush, lavish, outrageous aircraft interiors in your mind, this is clearly not the case here. With Kite, the focus is on functionality and comfort, in the sleekest, most minimalist form possible.

Inside, there are two large front screens and two smaller ones on the backs of the front-row seats, displaying flight information (flight duration, takeoff and landing data, the likes). There is storage space under the seats for small carry-ons, as well as more space in the back for larger bags. Presumably though, you wouldn’t be packing your entire wardrobe to head over to a business meeting or to the office on the daily.

Once Kite lands, it docks onto a fixed platform that makes embarking and disembarking easier, and allows for recharging for the next flight. Ponti doesn’t say how much that would take, or offer a figure in terms of the number of flights one such autonomous passenger drone could hypothetically make within the space of 24 hours. 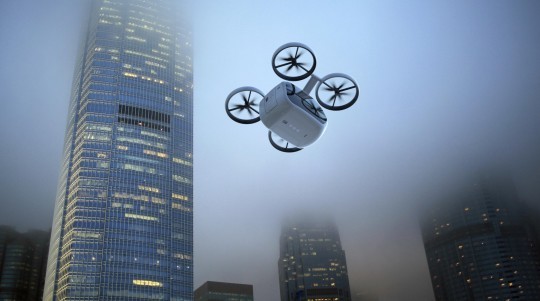 “With its sophisticated design, composite materials and advanced technology, Kite is a sustainable and attractive alternative to more traditional forms of air or land transport,” the design studio notes. “Kite also embodies the innovative drive of this up-and-coming region and it promotes the advancement of scientific and technological research, not only in Hong Kong and the Greater Bay Area, but in all of Asia.”

That said, Kite is only a concept as of this moment.