Lock Down Mountain Bike Film. Having some time now free during lock down allows practice and use of camera shots not normally used.

Using a local lane next to where we live and my lad Kayden as the model. This short film edit was shot over three days for an hour or so per shoot.

Day one the GoPro was used, Day two the ground-based camera had its turn. Day three saw the Mavic Pro 2 take to the air.

It was great to see all the footage in the editing suite then footage chosen out of about 2 hours of filming.

When all the camera angles and positions are used, not just drone footage as I normally shoot, then the edit becomes much more of a story.

The GoPro I loved, when it can be installed in positions to capture facial expressions, wheel shots. These add a dimension of the human factor and a real sense of movement and activity.

The GoPro was also great at being left on the road to capture those real low-down shots.

Be creative and capture as much material as possible but in as many different angles as possible. Just shoot and shoot. 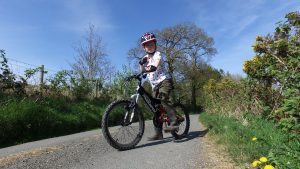