The Plano, Texas, company successfully demonstrated the shipboard integration of its V-BAT UAS during the mission, which was supported by the Enhanced Counter Narcotics Operations President Trump kicked off in April. The 10-month mission began in October 2019 with a demonstration of V-BAT’s small footprint, quick set-up and deployment, and vertical takeoff and landing (VTOL) capabilities.

Martin UAV primarily provided surveillance and reconnaissance for USSOUTHCOM during the mission, deploying EO/IR cameras so the drone could fly day and night, Martin UAV’s Vice President Heath Neimi said. The V-BAT can carry a range of interchangeable payloads based on mission requirements.

A technology assessment to support the USSOUTHCOM Exercises and Coalition Affairs Directorate, Long Duration, Long Dwell (LD2), began after successful completion of the shakedown. LD2’s goal is to enhance the execution of the Department of Defense’s strategic objectives using commercial off-the-shelf technologies. 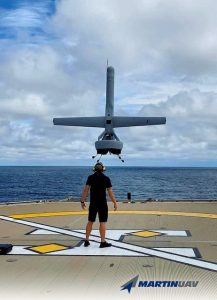 The V-BAT is what Neimi describes as a third generation VTOL tactical drone. The first-generation drones require a launcher and a runway, while the second can be deployed without a runway, but still require a launcher. The V-BAT doesn’t need either, which is critical when launching from the deck of a moving ship. The deck should be clear of equipment, which is what makes a VTOL solution so attractive for these types of missions.

“We call it equipment-independent,” Neimi said. “It still has telemetry and ground control, but there’s no launcher or recovery system.”

The VTOL safely transitions into a high-endurance, fixed-wing aircraft, can carry a variety of payloads and is able to fly in harsh conditions on both land and sea, Neimi said. It has a wingspan of 9 feet, a length of 8 feet and weighs 88 pounds.

During the mission, the V-BAT would stay at sea for days at a time, Neimi said, successfully flying in harsh environments, including storms that quickly dropped large amounts of rain.

“Large thunderstorms would spring up suddenly and you were flying through sheets of rain to get back to a ship that’s moving at sea,” Neimi said. “We were able to showcase the sturdiness of the V-BAT and its ability to withstand a large amount of rain and windy conditions.”

The V-BAT’s ability to handle wind is critical for maritime applications because gusts can change instantly during launch or throughout the mission.

“That can be problematic for drones,” Neimi said. “The V-BAT, when hoovering, automatically turns into the wind so it doesn’t deal with the cross winds that can cause instability. And the ship might not be traveling into the wind for you. When you have all this going on, you need a drone that can instantly shift, and the V-BAT does that.”

Once the V-BAT completes its surveillance mission, it must return to and land on the moving ship. This can be challenging, Neimi said, especially in a GPS-denied environment.

V-BAT uses a GPS puck and a Planck Aero navigation solution that enables it to land on  a 1 meter by 1 meter square placard it can see on its approach.

“It does this autonomously, so there’s no one guiding it,” Neimi said. “It can land precisely on moving ships, making it uniquely suited for maritime.”