A Power Distribution Board is also known as PDB, is an overlooked component simply because it is outdated. Electronic components have come a long way in the past decade. Back in the day, PDB’s were an essential component in the building of a drone. But is it still a viable option? Let’s find out.

PDB’s essentially distribute the power from the battery to the drone esc. But the technology has improved so much in recent days that PDB’s also distribute power to some other peripherals such as FPV Video Transmitters, FPV Cameras and the Quadcopter Flight Controller itself. Some modern FC’s have integrated PDB’s, are limited by space and can only accommodate so much that they do not do a very good job at filtering the voltage spikes from the insane current draws from our quads.

Having said that, Power Distribution Board are still preferred by some people, including myself, as they reduce the stress on the Flight Controllers and usually are better filtered from electrical noise. Yes, you can just add a 4 in 1 ESC and call it a day, but c’mon replacing 1 ESC is cheaper than replacing a 4 in 1 ESC.

PDB’s come in the usual 20x20mm and 30.5×30.5mm sizes. But the 30.5×30.5 is more popular and the current draws in the smaller quads are very little and hence can mostly getaway by using an FC integrated PDB. The larger quads draw more than 100A at maximum throttle which means that a lot of heat is generated. Hence to handle these high currents and heat, high-end PDB’s make use of higher copper content in their boards. The above picture of a typical PDB shows it all. Any PDB has tabs to solder the battery. The PDB also has 4 sets (PDB supporting 4 ESC’s) or 6 sets (PDB supporting 6 ESC) of 2 pads each to solder the ESC on. The Power Distribution Board has tabs marked as S1, S2, S3 and S4 indicating the signal tabs for motor 1, 2, 3 and 4 respectively. This is how the Flight controller talks with the ESC and controls how the motors spin. Some PDB’s might have a current sensor and typically contain 2 types of voltage regulators to power the FPV cams and VTx. 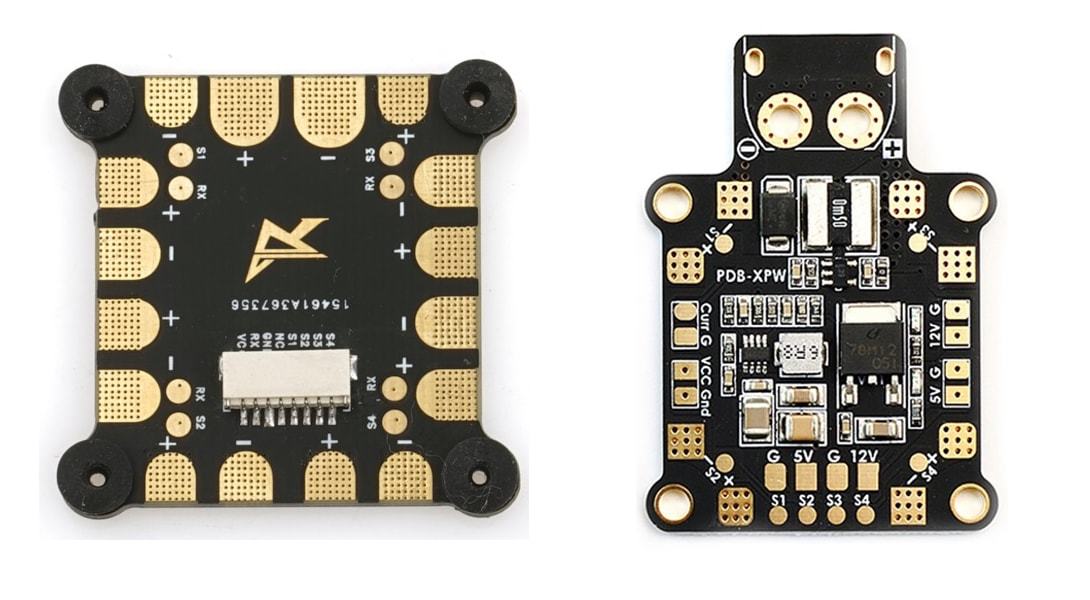 PDB’s have come a long way from just bare bone PCB’s (Printed Circuit Board) that distributed currently to so much more, that one of the nicest advancement is the integration of voltage regulators. The lower filtration and build quality of the voltage regulators present on an FC, might in part be due to the more advanced features being added to the Flight controllers.

The FC’s are not growing in size and cramming lots of features becomes a problem, that the manufacturers started to cut corners. The FC’s nowadays are well optimized and usually have voltage regulators built in to provide power for other peripherals. The voltage regulators present on an FC are what’s known as a linear voltage regulator (It works by taking the difference between the input voltage and the output voltage and burning the excess as heat) which are very inefficient and are cheaper.

The PDB’s have well Switching voltage regulators (Switches on and off several thousands of times a second to charge an inductor) are most efficient and do emit excessiveheat, meaning to say the voltage regulators are well made when compared to the Voltage Regulators present on an FC.

For further reading on Linear and Switching regulators PDB’s come in all shapes and sizes, all the way for smaller 3” quads to larger 10” X-Class quads. As the size of the quad increases, so does the voltage and current requirements.

The smallest available 20×20 PDB from Lumenier has a maximum current capacity of 100A and with voltage support from 3-5s. A medium-sized PDB from Matek can handle a maximum current of 184A and upto a voltage of 6s. 8” and larger sized quads, require voltages greater than 6s and some of the available options on the market are one from Matek X Class and this one from RacedayQuads.

Both the PDB’s support voltages up to 12s with the maximum current of the RDQ at 500A and the Matek with a 280A continuous and 440A burst current rating.

So it all boils down to the size of the quad. If the quad is a 3” or 4” then a small 20×20 PDB will suffice. Quads from 5 to 7” will work fine with a medium power PDB and anything larger than 7” will require an X class PDB.

Remember when I said that the PDB’s are not the same as they were a decade ago. PDB’s have evolved into something more than just distributing power. Manufacturers saw the wasted space available on a PDB board and with innovation or dare, I say sales figures in mind, tried to make multipurpose PDB’s. Matek was the first company to design multipurpose PDB’s. One of the simplest PDB combos would be the PDB and VTx combo. Matek launched the FCHUB-VTX with its first PDB coming with a VTX. This was a first of its and was/is hugely popular when it launched. It took the drone community by storm with the FCHUB-VTX being the first of its kind. It saves an extra stack in the already crammed frames and these boards perform of the task of two individual components.

The VTx present on the FCHUB-VTX PDB is no slouch as it is one of the best performing VTx on the market. It is a 40 channel, a switchable video power supply of 25, 200 and 500mW. It also has a 184A current sensor in case the FC is missing it. If you are planning to use a Matek F405 FC or similar, then the PDB and the FC can be connected with a 30 pin ribbon cable, getting rid of the messy cables running between the FC and PDB’s.

Power Distribution Board with FC 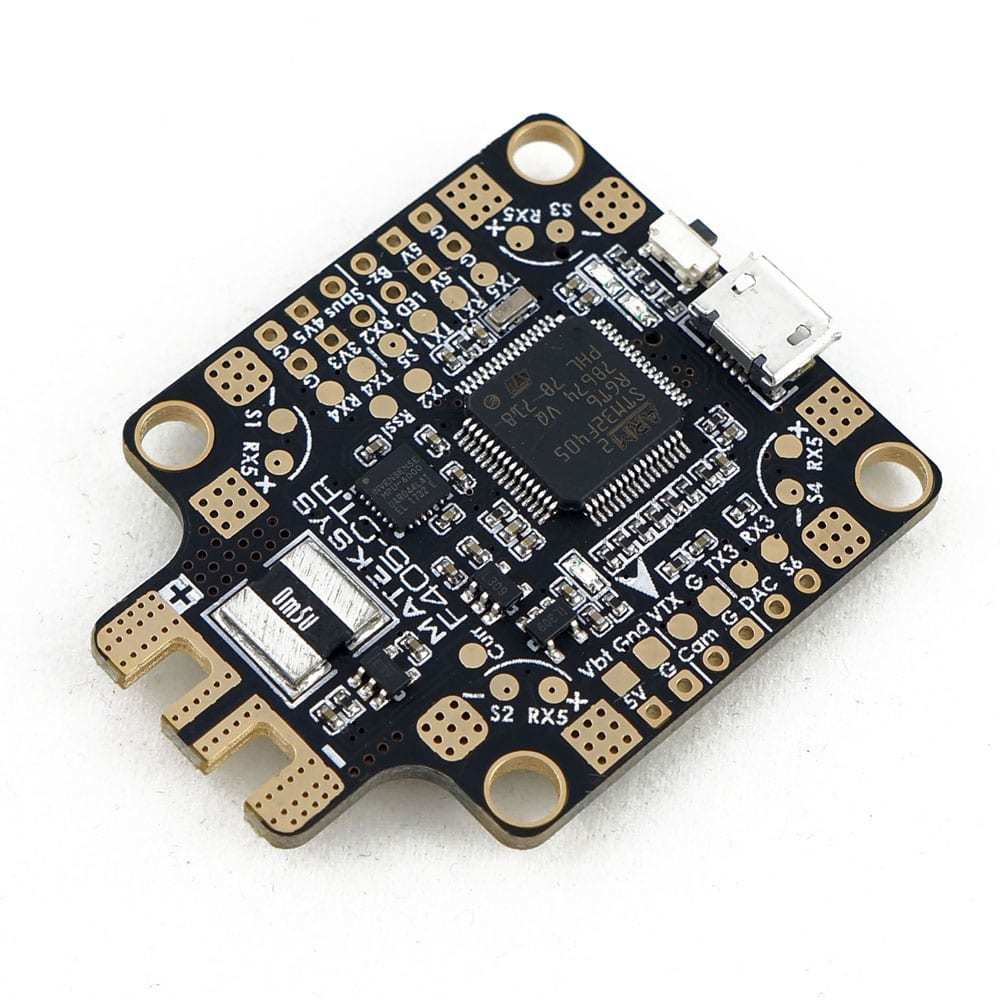 I’d attribute the FC integrated PDB combo is one of the most innovative and advancement in the drone industry. The FC PDB combo has so much going in such a small package that it truly is a marvel. The Matek F405 CTR was one of the first companies to introduce the PDB integrated FC.

Are you wondering if the manufacturers had to make some cuts to combine 2 different boards into one? The answer is NO!! that is what makes this component so unique. The Flight Controller has all the features and components that a regular FC would have, all the way from barometers to measure the atmospheric pressure to flash storages to store flight data. The PDB also makes no compromises with most FC PDB combos, with current carrying capacity over 30A. Some FC’s come with a current sensor, some don’t. Current sensors have become so important in today’s drone building. Current sensors well help to measure the amount of current the quad draws. 22xx motors draw more than 30A per motor and manufacturers sometimes don’t provide the most accurate of current draws for their motors. Hence, for this reason, current sensing becomes essential to monitor the current draws of motors, to ensure that the PDB is not stressed and not stressing the batteries.

4 in 1 ESC’s as the name suggests, is a board that has 4 ESC’s. 4 in 1 ESC’s are compact, lightweight and greatly reduce the wiring mess. Since individual are not used here, the need to use PDB’s are avoided.

Not only cost, but the 4 in ESC’s are also becoming much more reliable. The downside to using a 4 in1 ESC is that if one ESC dies, the whole board is useless even though all the other three ESC’s are working fine.

For further reading about ESC’s

Do we need a Power Distribution Board for our quads? That’s debatable. Some people think the advancement in the drone industry is enough to make the PDB obsolete. PDB’s are a classic in my opinion. They perform one of the most fundamental tasks, distribute the current evenly which I think is an important task in itself that can’t be truly replaced.

A standalone PDB with an integrated VTx performs so much better than an individual PDB and VTx and with its high quality and efficient voltage regulators justifies the price in itself.