HYDERABAD: Apart from surveillance and sanitisation efforts, drones are also being used by the government of Telangana to make roads safer for commuters.

The Telangana State Industrial Infrastructure Corporation (TSIIC), in association with IIT Hyderabad, recently took up a drone survey of a proposed road adjacent to Biodiversity Park, which as of now is hazardous due to the presence of boulders and loose rock formations on either side.

The proposed road is in Hyderabad Knowledge City, Madhapur, where many new office buildings have come up in recent years.

To meet the increasing demand for better connectivity, the TSIIC has recently constructed a new carriageway of around 850 metre connecting the internal roads of Hyderabad Knowledge City with the Old Mumbai Highway, joining the same adjacent to Biodiversity Park. 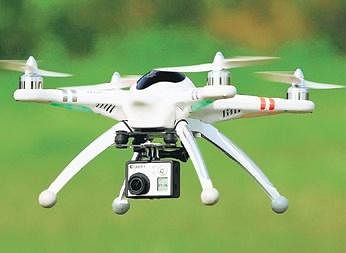 The new road was constructed by drilling the hillock to create a passage. However, there is a hazard as there are loose boulders on the hilltop and rock slope falling onto the carriageway. To mitigate this threat, TSIIC roped in IIT Hyderabad to conduct a survey of the area and to recommend the ways in which the area can be made safer.

IIT Hyderabad researchers used DJI Phantom 4 Pro, which is equipped with GPS and a camera. Several pictures were taken by the drone which has helped the researchers in analysing from a geological perspective and creating digital elevation models (DEMs).

In a report submitted by IIT Hyderabad to TSIIC, the researchers say: “It is clear from the site visit that both sides have certain features like horizontal layers of the rock and vertical joints. While these features can be examined in person, high resolution of camera allows us to examine these features from much higher places than one can normally see.”

The drone survey found that there were not just horizontal but also vertical cracks in the rock formations. “Cracks of five to ten cms wide were visible on the rock cliff surface. A series of cracks were seen on the slope, which will facilitate the seepage of precipitation and may trigger further slope deterioration, ultimately trigging sliding of rocks,” the report said.

Based on these findings from the survey, the researchers recommended to remove the loose boulders from the top of the hillock, provide drainage so that water seepage does not hamper the rock formations.

TSIIC roped in IIT Hyderabad to conduct a survey of the area and to recommend the ways in which the area can be made safer.

The researchers recommended to remove the loose boulders from the top of the hillock, and provide drainage so that water seepage does not hamper the rock formations further. Rock face stabilisation has also been proposed wherein mechanically woven, hexagonal wire mesh will restrict any rockfalls